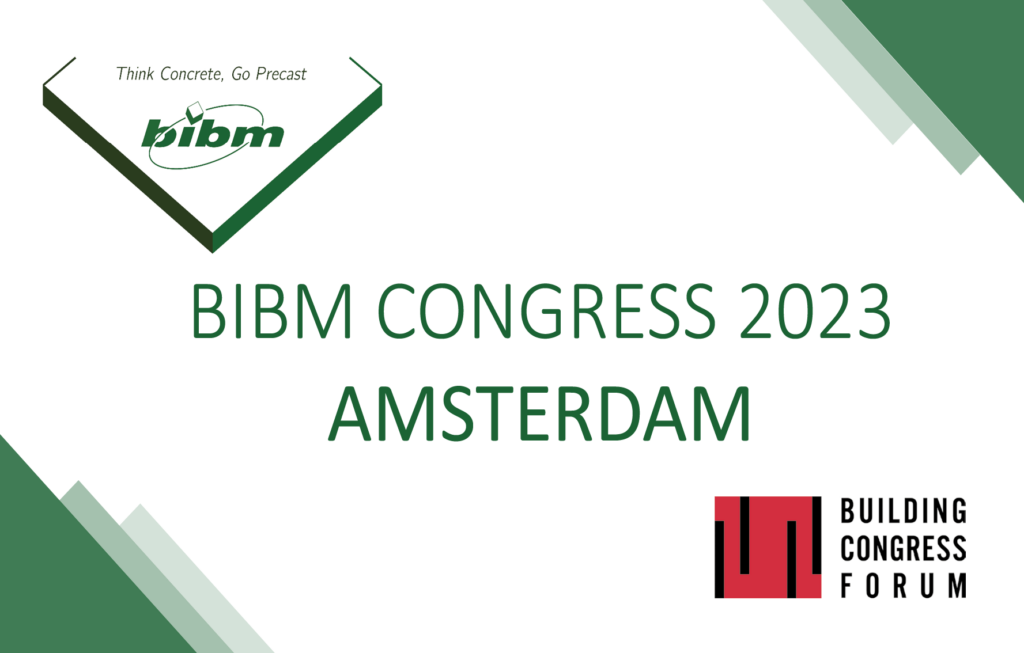 The 24th BIBM Congress will take place in Amsterdam! From the 27th to the 29th of September 2023 the congress will be held in the Dutch capital – the “Venice of the North”. The congress will be under the slogan “Green Digital. Resilient. – Precast Concrete Solutions”. More information on bibmcongress.eu. 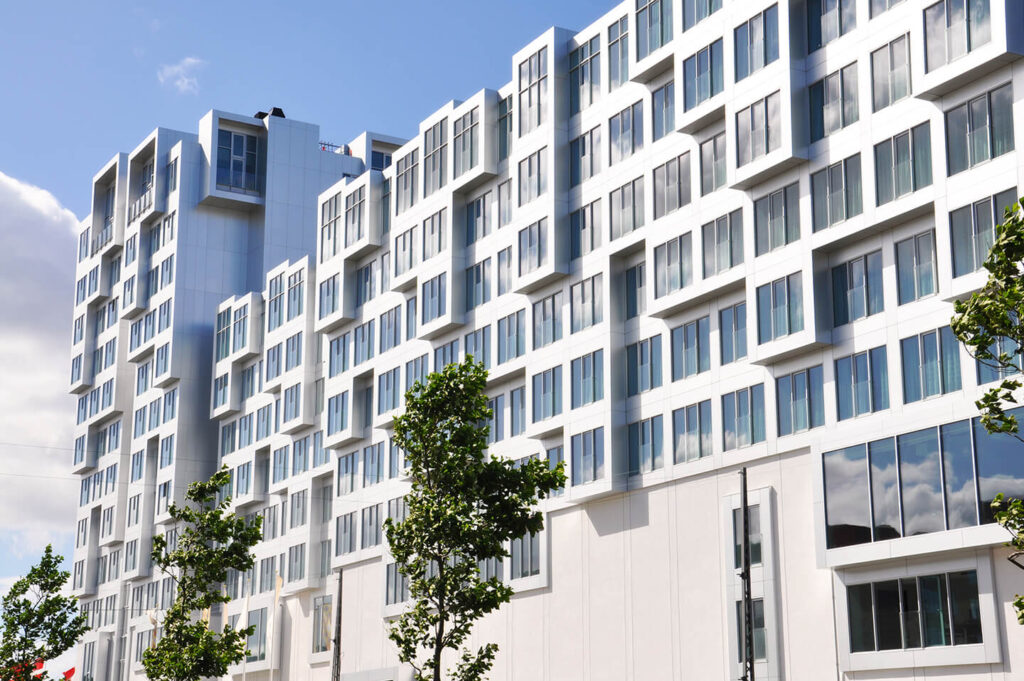 With a delay of one and a half years due to corona, the 23rd BIBM Congress took place in Copenhagen from November 14 to 16, 2021. The European precast concrete association Bureau International du Béton Manufacturé (BIBM) together with the organizers of BCF – Building Congress Forum GmbH had invited to the Danish capital. Around 350 people from all over Europe attended the industry event and met at the Tivoli Congress Center under the safety and hygiene regulations in force in Denmark. The technical program focused on construction with precast elements in the Nordic countries. “The Future of European Construction – Precast Excellence in Nordic Countries” was therefore also the congress motto. In addition to best practice examples from these countries, megatrends such as digitalization, circular economy and decarbonization were on the agenda.

Increased demand, rising prices, the scarcity of resources and stricter climate protection requirements pose enormous challenges for the construction industry, emphasized the Dutch BIBM President Bart van Melick via video in his opening speech. As the most widely used building material in the world, concrete is a particular focus of attention. In view of the many positive properties of concrete and the advantages of precast concrete elements, he nevertheless looks optimistically into the future. Even if the way there is certainly not easy, the industry has a high innovation potential and offers solutions for the future. This was also demonstrated by the contributions at the congress.

BIBM Secretary General Alessio Rimoldi and Head of Public Relations Magdalena Herbik first presented the planned measures under the “European Green Deal” and their impact on the industry. The EU Commission is aiming for a climate-neutral Europe by 2050. To achieve this, net greenhouse gas emissions are to be reduced by at least 55% by 2030 compared with 1990. In their presentation, they showed what contribution the precast concrete industry can make to achieving these climate protection targets. In doing so, they referred to the new edition of the “Little Green Book”, which compactly presents the many benefits of precast concrete and was distributed to the public for the first time at the BIBM Congress. Seamus McKeague, President of the International Prestressed Hollocore Association and Managing Director of Creagh Concrete Products Ltd, then went into some of the advantages, such as fire protection, shorter construction times or the variety of designs, and presented realized residential and commercial buildings in Great Britain and Ireland.


BEST PRACTICE FROM SCANDINAVIA AND FINLAND

Interesting impulses were provided by the examples from the Scandinavian countries and Finland. They play a pioneering role in terms of prefabrication. Architect Bo Christiansen, Scaledenmark, explained how Copenhagen is setting new standards for sustainable urban development. With design sensitivity, political foresight and green mobility, the Danish capital has set out to become a CO2-neutral metropolis as early as 2025. Making the city more livable and creating added value with its buildings is also the concern of JAJA Architects. Kathrin Susanna Gimmel presented the Lüders parking garage in the former harbor as an example. With its eight floors, it provides sufficient parking space and at the same time offers a place on the roof that invites people to play, do sports and linger. As part of the “Ressource Blokken” research project, the office is currently working on the construction of a housing estate made of precast concrete elements that were already used in the 1960s and 1970s. Supporting upcycling and becoming “precast concrete reusers” in addition to precast concrete manufacturers was therefore their call to the industry. The contribution of Finnish architect Kimmo Lintula, K2S Architects, was also forward-looking. He presented sustainable architecture made of concrete, using innovative technologies such as concrete core activation.

The theme of “sustainability” ran like a thread through the program. Contributions on research projects such as SeRaMCo (Secondary Raw Materials for Concrete Precast Products) by Prof. Dr.-Ing. Christian Glock, Technical University of Kaiserslautern, or on the projects VEEP and RE4 (RE4 – REuse and REcycling of CDW materials and structures in energy efficient pREfabricated elements for building REfurbishment and construction) presented by Zuzana Tatáková, project manager at FENIX TNT, showed the potentials of precast concrete elements in terms of circular economy. For example, by optimizing the mixes for recycled concrete, new applications were also developed for load-bearing and non-load-bearing precast concrete elements. In addition, the recycling of construction and demolition waste materials as well as the use of demountable precast elements enable buildings whose components can be completely dismantled and recycled at the end of their life cycle. This can significantly reduce the amount of waste generated.

Another example of this is the “Circle House” project. It shows that circular and at the same time low-cost construction can also be realized in practice. In a newly developed residential area near Aarhus in Denmark, the world’s first social housing units built according to the principles of the circular economy were created. Kasper Guldager Jensen, co-founder Home.Earth, and Topi Paananen, Peikko Group, reported on the property and the innovative connection technology used, which enables easy deconstruction of the precast concrete elements.

Decarbonization makes a significant contribution to reducing the ecological footprint of the construction industry. In addition to new CO2-efficient raw materials for cement clinker and concrete production, the capture of CO2 in the cement plant and its utilization or storage (carbon capture and utilization/storage) play a particularly important role. Claude Loréa, Executive Director of the Global Cement and Concrete Association in Brussels, outlined the cement and concrete industry’s plan to achieve “net zero” CO2 emissions by 2050. Anne Rønning, Østfold Research Institute, and Christian John Engelsen, Research Scientist Infrastructure from Norway presented their research project on the sequestration of CO2 in concrete. For Prof. Karen Scrivener, University of Lausanne, the use of concrete is essential in view of the increasing demand for construction and the limited supply of wood. She is betting on low-clinker cements for the future, in which a significant proportion of the limestone is replaced by clays, which are considerable and whose potential has hardly been exhausted.

Communication and interaction with political decision-makers is another important aspect of the sustainability debate. One of the main tasks is to break through the often entrenched opinions about substitutes such as wood as a supposedly more “sustainable” building material in order to maintain the industry’s competitiveness. After all, these are often not based on scientific facts, but on emotions. John-Erik Reiersen, Managing Director of the Norwegian Precast Concrete Association reported on his personal and data-based approach.

USE IN ROAD CONSTRUCTION, GARDENING AND LANDSCAPING

Precast concrete elements are widely used in road construction, gardening and landscaping. In this context, Sogge Johnsen, Product Manager at Basal, informed about innovative sustainable trends in stormwater management. Stef Maas, Managing Director of the Belgian Precast Concrete Association, presented the impressive infrastructure of the Flemish cycle path network. It was expanded a few years ago to include a route through the middle of the De Weijers pond landscape in the province of Limburg. The cycle path leads from one bank to the other. You don’t get wet, because the bike path, which is built below the water level, is paved on both sides with walls made of concrete elements and thus offers a unique riding experience.

THE CHALLENGE OF DIGITIZATION

A future topic that could not be missed at the BIBM Congress: digitalization. How can the digital transformation in the construction sector succeed? Where are the challenges in implementing it in the plant? These were the questions addressed in the presentation by Christophe Sykes, General Manager of Construction Products Europe. Due to decentralized construction production, the potential is often not sufficiently exploited. In many places, the necessary transparency and communication are still lacking. One building block of digitalization is Building Information Modeling (BIM). Specialist Brian Rasmussen, Bravida Denmark A/S, reported from his practical experience and on the hurdles that have to be overcome when implementing BIM in the company. Alejandro Lopéz Vidal from the Spanish Precast Concrete Association pleaded in his contribution for the industry to deal with digitalization and its specific challenges at an early stage. New methods such as BIM and innovative technologies such as 3D concrete printing, augmented reality, etc. offered opportunities to increase efficiency in operations and secure a competitive advantage.

This was also in line with the view of Prof. Benjamin Kromoser from the University of Natural Resources and Life Sciences, Vienna (BOKU). For example, in view of the prevailing shortage of skilled workers, new digital planning and automated manufacturing methods show great potential for significantly increasing productivity. He also listed further levers for more efficient and resource-saving production in the precast concrete industry. Starting points would be the material, the structure and the production.


INNOVATIONS OF THE SUPPLIER INDUSTRY

The two “Innovation Workshop Sessions” were also very well received by the participants. Here, selected exhibitors presented their technical solutions for everyday production in compact lectures. The congress was accompanied by an exhibition featuring 73 companies from the international supplier, machinery and software industries, led by the main sponsor of the congress, Master Builders Solutions.

For the accompanying persons, the social program provided an opportunity to get to know the Danish capital a little better. A highlight for everyone was the evening event in the historic Langelinie Pavilion. The generously dimensioned listed building from the 1950s not only provided a magnificent view over the skyline and the harbor of Copenhagen, but with its ambience in the mid-century style of Danish interior design also offered a worthy setting to bring the first day of the congress to a comfortable close.

To educate oneself further without restrictions, to talk with colleagues and market partners and to talk shop – for a few days one felt transported back to “normal” times at the BIBM Congress. A state that will hopefully be possible again for everyone and everywhere in the foreseeable future.

The next BIBM Congress will take place in 2023. The location will be announced in spring 2022.

Manage cookie consent
In order to provide you with an optimal experience, we use technologies such as cookies to store and/or access device information. If you consent to these technologies, we may process data such as browsing behavior or unique IDs on this website. If you do not give or withdraw your consent, certain features and functions may be affected.
Manage options Manage services Manage vendors Read more about these purposes
View settings
{title} {title} {title}